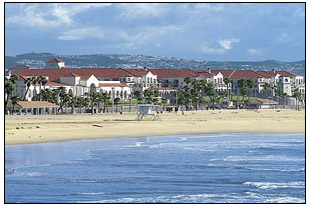 There’s signs of an upcoming marathon everywhere you go in Huntington Beach this week. If the bright orange road signs warning of road closure weren’t enough, then watching all the runners might tip you off. As I drove to the beach for Surf City Nights this evening, I saw 6 runners of marathon quality running rapidly after dark. I see runners on Edwards Street and Edwards Hill all the time, but not running quite so fast. These men and women were really in shape and you could tell that each was preparing for something big.

Fast forward to Marathon Central, the City of Huntington Beach beach parking lot across from
The Hyatt Regency and Hilton hotels. Two huge Enterprise trucks sat ready to spring into action delivering water and supplies for the Super Bowl Sunday Marathon, called Surf City USA Marathon. As I took my evening stroll, runners zipped pass me–more than I’ve ever seen for a cool January evening. And as I walked past the parking attendant at Sunset Vista RV Camp parking lot, I saw his billboard notice to employees stated, “There are NO available spots for the marathon. Cancellations are already filled.”

I’ve received the warning about the street closure in the mail, and one family member has gotten his VIP pass for the day’s events. He hopes it won’t rain to high heaven like it did last year. Only sunshine and warm days are predicted. The event is SOLD OUT and 16,000 runners or so are expected to fill the beaches and streets as they participate in this Marathon Qualifier. Today the signs of a marathon are evident. Each day as it draws near, I’ll see more evidence. I suspect they’ll begin setting up their tents and expo areas tomorrow.

And on an interesting note, with hotels filled, it will be interesting to see how sponsor, Hyatt Regency, will handle hosting two events–a Centennial Ball attracting over 600 people Saturday night to the hotel, and the marathon attendees, 16,000 strong. The hotel has less than 600 rooms, not enough to accommodate everyone. This is one interesting weekend locals won’t forget.

There are so many fresh sounds and better known musicians appearing this month and next that we felt it was worth taking the time to steer you in the right direction. Up&coming artist Misha travels from New York to perform at Gallaghers this month. Beautiful, blonde, and quite melodic in her sound, she offers a free show! That’s one of the best deals around.–Maybe.

Then there’s the big gig at Pelican Isle. Another free concert brings together all star performers such as the drummer from the Walter Ttrout band and bass guitarist for John Mayall and the Bluesbreakers. These famous bands hold a long history with Huntington Beach, and it’s great that musicians find the local scene worthy of their attention. Erich Munzner who put a band together (Good Fortune), has managed to create a sound that’s professional, unique, and very compelling.  Read more

Two floats from The OC won awards at the Rose Parade this year 2009. A rolling swimming pool from Mission Viejo and Making a Splash, Huntington Beach’s centennial recognition float, were chosen  by Rose Parade judges for two of the Rose Parade’s 24 awards.
What a way to celebrate the centennial of Huntington Beach. We won the coveted Mayor’s Award for our Surf City USA-themed float! Congratulations Huntington Beach, and Happy Birthday. Huntington Beach won the Mayor’s Award for its “Surf City USA”  float celebrating Huntington Beach’s city 100th anniversary celebration. The award is given
to the most outstanding city entry, national or international. The winners were announced this morning by the Pasadena Tournament of Roses Association. Cloris Leachman was the Grand Marshall for the 2009 Tournament of Roses Festivities. You can vote for HB’s best, by logging onto ktla.com/roseparade to cast your vote from 10 a.m. to 6 p.m. today. In a popularity category, a winner will be announced Friday morning during the KTLA Morning News.

As a loyal Huntington Beach resident and former Huntington Beach Conference and Visitors Bureau employee, I am sitting at my computer with the Rose Parade broadcast on, waiting to see Surf City’s float that celebrates the centennial in HB. I saw Tyson the skate dog, a former HB celeb, ride the dog food float. But between all the commercials, I have to keep switching off to other channels. There are lots of football games, and a Honeymooners marathon on WGN. As a Time Warner subscriber, I wasn’t sure if we’d lose some channels since the company’s last hour negotiations with Viacom were reportedly going south. As a result, I was already looking into bundling my Verizon services and adding their digital cable to my voice mail, phone and FIOS. What I didn’t like was the addition of new cable lines to all my TVs in the house. For this technological advancement we supposedly are experiencing, they sure haven’t created  useful technologies to deal with the movement of signals. Installing yet another set of cable lines throughout my house is going to look really bad. The Time Warner sub-contractor that installed one set did a poor job and they look tacky.

Anita Brace graciously invited some of us to join her at her hotel room she booked well over half a year ago in Pasadena. The Ramada on Colorado Blvd. charged several hundred dollars per night for a AAA two diamond room, and they had a minimum stay of several nights, as well.   Back in HB the sun is breaking through. My family tried to get some of the city officials to attend the polar splash at the pier. But they’re mostly in Pasadena this year, watching the float and parade revelry. This year is the 100 year birthday of Huntington Beach and the Rose Parade float with a surfing theme was part of the launch of a year of celebrating. Having lived in Huntington Beach 30 years, worked here to promote it as a tourist destination, served on the 4th of July parade board to celebrate its assets, and after donating hundreds of man hours to the city and its various non-profit organizations, I can happily say that it is really a great place to visit, and even better place to live! Happy Birthday, Huntington Beach!

HUNTINGTON BEACH â Up to 1000 beachgoers will take the plunge and run into the ocean during the 2009 Surf City Splash, an event that promises to provide some bone-chilling thrills in the name of fund-raising goodwill. Splashing into the Pacific Ocean for some 50 something temps, high noon is the countdown to fun at the Huntington Beach Pier  at an annual event sponsored by  Lions club, and one specific lady with a heart, Lee Love. Organizer Lioness Lee is helping raise funds for her favorite outreach program, Canine Companions. Started in 2001 when Huntington Beach resident Michael Parks organized the first event with his church group, Love joined in just a year or two later, producing t-shirts and publicity to grow it into an annually-recognized activity. Since that time, the event has changed names at least twice. This year is the first year it is called the Surf City Splash, in recognition of the city’s centennial celebration. While most city officials were unable to attend the splash as they are in Pasadena riding or watching Huntington Beach’s float in the Tournament of Roses Rose Parade, the spirit of the ocean remains with all who love the new year, and Huntington Beach.